Montgomery County was formed in 1821 out of Bond and Madison Counties. It was named in honor of Richard Montgomery, an American Revolutionary War general killed in 1775 while attempting to capture Quebec City, Canada. Our population is 30,104. 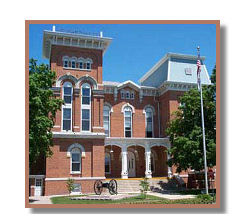 The Historic Montgomery County Courthouse was built over a period of time from 1868 to 1872, but contains in its walls fragments of an earlier courthouse which was well known to Abraham Lincoln.

The new courthouse was built in 1993.